“We envision a world where composting is easy for everyone and that the impact of food waste is reduced,” said Taylor McCarten, Co-Founder and CEO of BinBreeze. “Many people assume that composting alone is great for our planet, however, the anaerobic process contributes a lot of harmful gasses and volatile organic compounds (VOCs). Introducing BinBreeze’s compost powder to the commercial market will allow us to potentially reduce 30 percent of harmful greenhouse gas emissions produced in composting. Additional benefits include the elimination of odours and the natural dehydration and elimination of fruit flies. We know this expansion will help out businesses with the immense impact they face around composting bins in their operations while helping the environment.”

International Pacific Sales Ltd. (IPS), a leading food sales agency in Western Canada, has been selected as the official distributor of BinBreeze products. The commercial product agreement will see IPS bring the BinBreeze 4kg commercial package to various segments of the market, including, restaurants, commercial buildings, multi-level dwellings and more in a continued effort to reduce the amount of organic waste finding its way into landfills. The contributions to local composting operations in a commercial capacity anticipate similar results to the household impacts of using BinBreeze. Local facilities can expect to experience less odour, higher nutritional quality of compost, and a decreased need for mixing, turning and adding extra materials lowering the processing effort, as well as a reduction in methane emissions.

“While we’re seeing positive trends in organic waste diversion initiatives and reduction in food waste in the commercial and residential space, we can’t lose sight of the harm that food waste has on the environment,” continued McCarten. “BinBreeze doesn’t contaminate compost, it enhances it. By introducing added carbon earlier in the food waste diversion process, before the food waste sits and becomes anaerobic, we reduce the emissions and make healthier compost while benefiting all types of composting facility providers.”

BinBreeze composting powder is scientifically-formulated, made up of naturally occurring minerals, fossilized algae, and clean wood waste. A circular economy product, all of its ingredients are sourced from the earth and ultimately return there. The clean wood waste used in the BinBreeze formula is sourced from industrial operations. Instead of burning this waste, creating harmful emissions, BinBreeze restores it to the soil in community compost operations. Per ton of wood waste that BinBreeze is able to upcycle, 70 percent is sequestered back into the soil, the remaining 30 percent is released as carbon dioxide from the natural aerobic decomposition process.

A Dragon’s Den success story, BinBreeze is available in three scents, Lavender, Sweet Orange & Cinnamon, and Unscented, at over 500 retailers across Canada and online at BinBreeze.ca. They are an Innovation award finalist for the Greater Victoria Chamber of Commerce’s 2022 Greater Victoria Business Awards, with winners selected this spring. They have also been named a top five finalist for the Vancouver Economic Commissions Angels for Climate Solutions, an education and training program geared towards climate-focused startups looking to fundraise. The company is based and manufactures the Product-of-Canada in Victoria, British Columbia.

BinBreeze began an equity seed round in March with intention to raise for further investments in the growth of their team, marketing efforts, inventory and facility expansion.

BinBreeze is the world’s first provider of all-natural and non-toxic composting powder that is on a mission to reduce the impact of food waste. BinBreeze’s scientifically-formulated compost powders are created out of wood waste and naturally-derived minerals that eliminate odours and emissions, while naturally dehydrating and eliminating fruit flies. A Dragon’s Den success story, BinBreeze is available in over 500 retailers across Canada. Join us on our mission, learn more and find your closest retailer at binbreeze.ca. 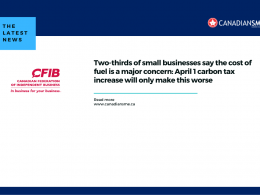 Two-thirds of small businesses say the cost of fuel is a major concern: April 1 carbon tax increase will only make this worse

TORONTO, March 17, 2022 /CNW/ – The price of fuel has become the biggest cost concern for 64% of small…
byCanadianSME 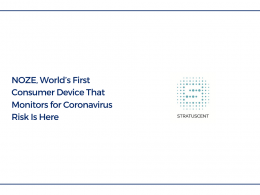 During her visit to the Mont-Orford ski resort for the launch of the Tourism Small Business Assistance Project, the…
byCanadianSME 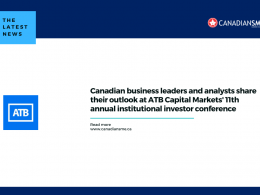