Canadian tech entrepreneur, philanthropist, and visionary Jim Estill, who launched a $2 billion business from the trunk of his car and has settled close to one hundred refugee families over the past four years, define servant leadership. His mission: showing by example how business leaders can make a positive impact in the world. Jim currently heads multi-national appliance company Danby Appliances and ShipperBee, a disruptor shipping company that is helping businesses reduce their carbon footprint, and is a firm believer in mentorship in business as well as in life. When settling refugee families, Jim moved from privately sponsoring as an individual, to making his company the first business in Canada to become a Sponsorship Agreement Holder.

Forty years ago, Jim started his entrepreneurial journey, distributing out of the trunk of his car while a student at the University of Waterloo in 1979. That company became Connect Tech, an embedded computing company, which still exists today, and EMJ Data Systems, which Jim sold to Synnex in 2004 and as CEO of Synnex, grew that company from sales of $800 million to $2 billion in just five years.

Jim is a change agent and an unstoppable visionary. Four years ago, if you looked at Danby Appliances Co., you would see a staid traditional appliance company. But what did Jim Estill see? He saw a platform, a company that manufactured traditional products in the form of boxes, which could also be transformed into something great. And that’s what makes him an entrepreneur. So, he bought the company and set it on a new path of innovation, new product development, and new business initiatives.

Over the years, Jim has invested in over 150 tech startup companies, but it is his role as a founder of many successful businesses (ConnectTech, EMJ and Simply Clean), Communitech, and YPO Western Ontario that defines his success. The new Danby Appliances Co. is Jim’s latest entrepreneurial chapter together with the creation of ShipperBee.

One of the first companies you founded, EMJ Data Systems was a huge success gaining up to $2 billion in sales. What was the inspiration behind founding the company and did you ever think it would become as successful it is today?

When I was in university, I wanted to start a company and do 100 million in sales because I thought that was a big number. When I got to 50 million, I said I better do 200 million. Then I got to 100 million and said I better do 500 million, and I kept on going up until I reached 2 billion in sales. When I first started the company, I wanted to design circuit boards as I’m an engineer. I started by buying computers and got a better deal if I bought 2 computers, and I sold one to someone who wanted it. Soon I bought another computer, some printers, and software. Eventually, I was buying and re-selling computers, so EMJ Data Systems was a reseller of computer products.

Entrepreneurs will always suffer from entrepreneurial fear. When I worked at EMJ Data Systems, I thought things are great and I can keep on going, but at some point, I’m going to hit a wall. So the fear of slowing down caused me to sell it. The reason I wanted to be CEO of SYNNEX Canada was to protect my staff because I’ve been working with them for over 20 years. I felt the loyalty and being CEO meant that we would be at the same location, so I was CEO for SYNNEX Canada for about 5 years.

You’ve created yourself quite a reputation as being a successful entrepreneur. At what stage in your life did you realize your passion for entrepreneurship? What made you decide to become an entrepreneur?

When I was in high school, my first successful entrepreneurial adventure was painting houses. When I got the bug of painting houses and working for myself was when I discovered my passion for entrepreneurship. I started my business when I was in my 4th-year university, and it never occurred to me not to start a company so that’s what I did.

Over the years, you’ve invested in over 150 tech Startups. Do you believe that tech companies have a stronger success rate compared to other industries?

I don’t believe tech companies have a higher success rate, but they do have a higher growth rate, and the growth rate is what I’ve focused on. Change is an opportunity and it happens in technology very quickly. If you start a restaurant business, it’s not going to change very much in the next 20 years, unless you’re speaking about technology for restaurants and that’s a different matter. I’m primarily focusing on my company Danby Appliances and my new venture ShipperBee. Trying to stay focused is very tough for an entrepreneur because we’re always aspiring to do more.

Being a tech entrepreneur, what do you believe is Canada’s strength when it comes to the tech sector?

You recently took home the CanadianSME Lifetime Achievement Award. What does this huge accomplishment and recognition mean to you?

You don’t do something for the award but it’s nice when you receive it. The only problem with it being a lifetime achievement award is it sounds like you’re done. I just started, so I feel that I’m not yet done. A future goal of mine for the upcoming years is to launch ShipperBee to become a meaningful player in the courier business. At Danby appliances, we’re about technology and change. The parcel mailbox that we created is a change in thinking, so rather than saying we’re an appliance company making bar fridges and freezers, we’re a company that makes large boxes. These boxes are to receive your amazon packages or other deliveries and that’s a market that will be huge within the next decade.

True wisdom is learning from the mistakes of others. Entrepreneurship can be lonely – having mentors can help give confidence.

When you purchased Danby Appliances many years ago, you had a clear vision about how you could bring it into the new era through innovation and product development. What were some of the methods you used to rebrand the company?

I am a tech guy so wanted to use the tech company ways in a smokestack industry. This would include things like speed, faster inventory turns, flexibility, etc. And we did also bring out a tech product – a parcel mailbox with an IP camera and WIFI that emails or texts when you get a parcel.

Through Danby Appliances, you’ve created a company culture that cares and a company that’s profitable and has a competitive advantage. What were some of the strategies that contributed to these positive aspects?

I try to lead by example. I ask questions. Questions provoke thought.

On a final note, what can you tell us about some of your future projects you have planned? What do the next 10 years look like for you professionally?

My goal is to use my businesses for the greater good. I know this sounds arrogant but businesses can change the world faster and in bigger ways than just one person can. Tying in economic reward with higher purpose – e.g. environment is the way to scale. 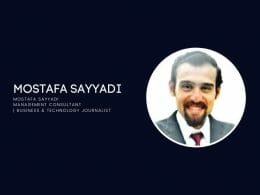